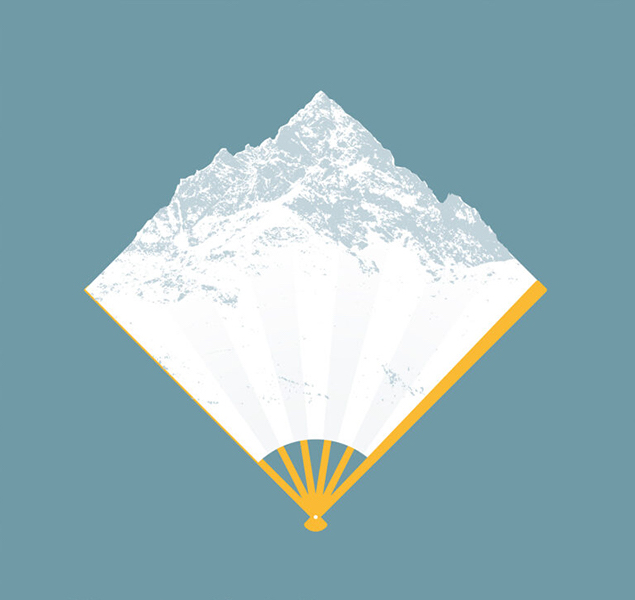 The collection of promotional fans of Museomontagna 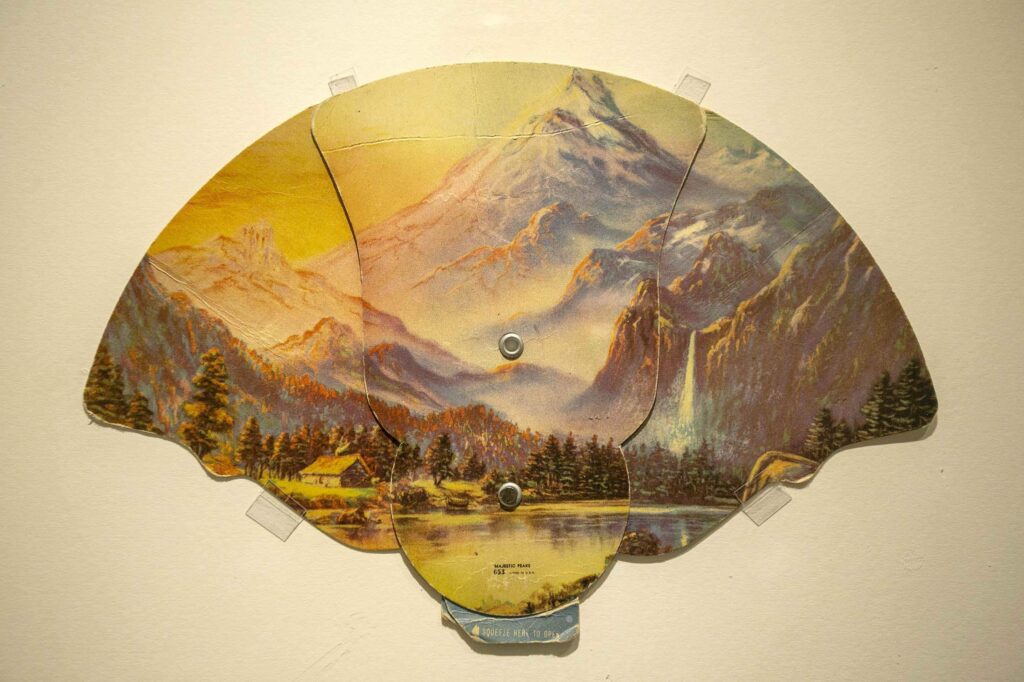 With the birth of the era of consumption and modern advertising, the fan is transformed from a luxury object to a mass good, thanks to the evolution of production techniques and the use of poor materials such as wood, paper and cardboard. In the past it was a valuable handicraft, but over time it became an industrial product distributed on a global scale, gradually losing its aura of preciousness but seeing its diffusion increase enormously.
The Museomontagna owns a collection of about 130 promotional fans of mountain subjects. Magnificence, grandeur and solemnity are the terms that best comment on the reason for such an imperial presence in the iconography of objects that, by contrast and by their very nature, appear small and fragile.

The promotional fan was born in Europe in the mid-nineteenth century as a vehicle for promoting tourism for hotels, spas and events, such as the great national and international Expositions, represented in detailed illustrations – still far from the icasticity of the visual language of the twentieth century – where the ephemeral alpine villages set up on such occasions and mountain scenery also find space. With the new century, and in particular in the United States, everyone began to recognize in this object a perfect instrument for advertising the most varied types of services and products: the shoe manufacturer, the grocer who used it as a small ready-to-wear sample collection, dance halls that used it as a sort of advertisement and service companies, first and foremost those of funeral services, who used it as a real business card. 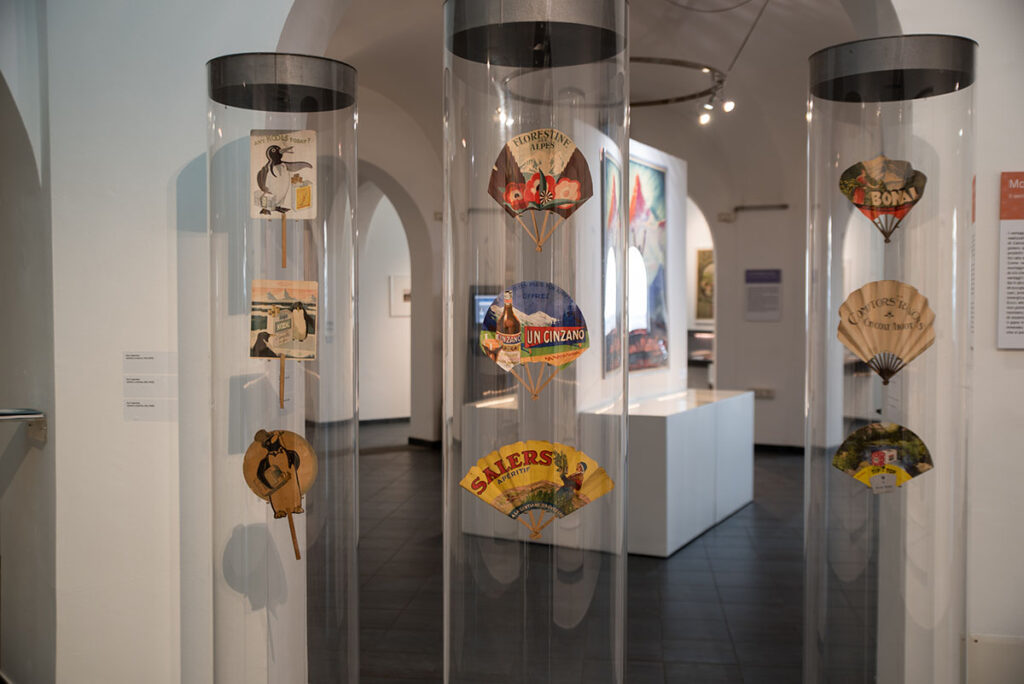 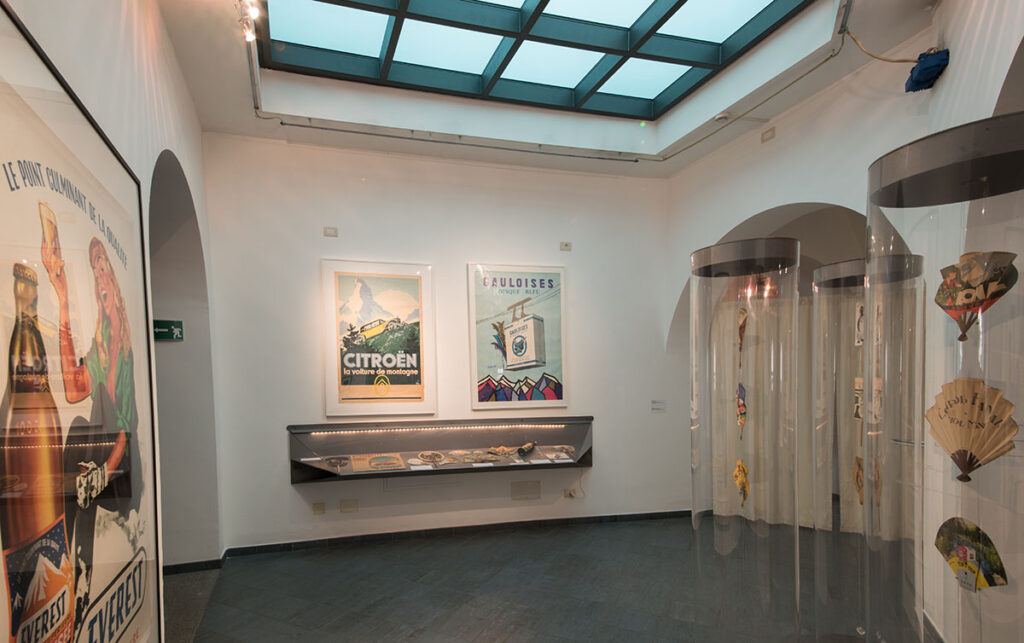 Promotional fans are a photograph of time, the cultural and anthropological testimony of a place and a souvenir of natural and mountain landscapes. With them, one can follow the evolution of the communication strategies connected to figurative taste: from the painting of the 19th century tradition to Liberty, up to the artistic avant-garde.
If in some cases the pre-eminence is left to the mountain, free to occupy the front of the fan in a total way, in other cases, products and mountain settings dialogue in a synergic way.
In other cases, products and mountain settings interact in a synergistic manner. Thus, a fragrance with the name Himalaya Bouquet could not have a better set than that of a mountain panorama; a Good Year tire declares its ability to perform even on mountain roads; the Tip-Top bread box uses the image of a snowy peak to make it clear that this type of food is the best that can be desired and achieved; the Bonal aperitif is made from gentian collected by a young girl in traditional costume; Suchard Milka chocolate alludes to the authenticity of Alpine milk with the Saint Bernard dog, later replaced by the lilac cow we all know.
With this project, the Museomontagna continues to enhance the heritage of its Documentation Center. According to a new curatorial and exhibition approach, the exhibition offers the visitor a contextualization of the fans in the different cultural contexts of their production, thanks to the presence in the exhibition of contemporary materials preserved at the Museum, such as photographs, posters and other collectible papers. 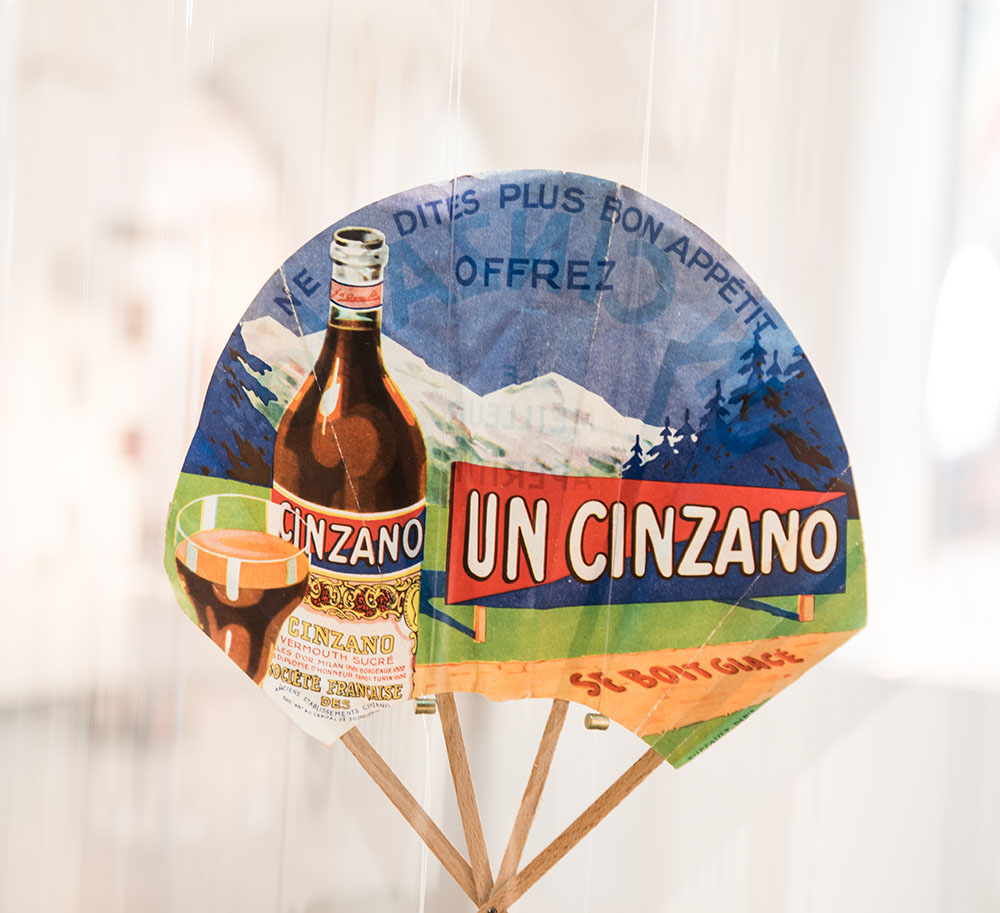 The exhibition was organized in collaboration with the PIEDMONT REGIONAL COUNCIL and the TRENTO CHAMBER OF COMMERCE, INDUSTRY, ARTISAN AND AGRICULTURE, confirming the Museum’s willingness and ability to share projects with important organizations and institutions that are sensitive to the importance of mountain culture.
mountain culture. In addition, the work of preparation has been an opportunity for comparison and international collaboration with the English Museum of the Fan (THE FAN MUSEUM, London), an authoritative reference point for scholars and enthusiasts.

Thanks to the CAMERA DI COMMERCIO INDUSTRIA ARTIGIANATO E AGRICOLTURA DI TRENTO (TRENTO CHAMBER OF COMMERCE INDUSTRY, ARTIGIANATE AND AGRICULTURE), the exhibition will then be open to visitors at Palazzo Roccabruna, during the Trento Film Festival, from April 12 to May 11, 2019. 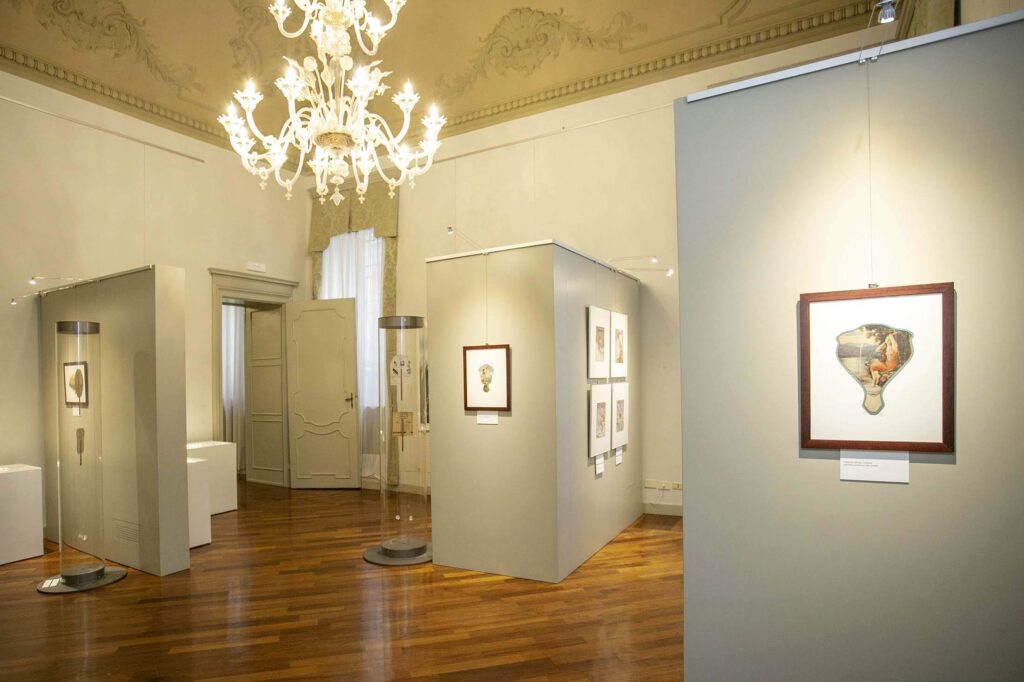 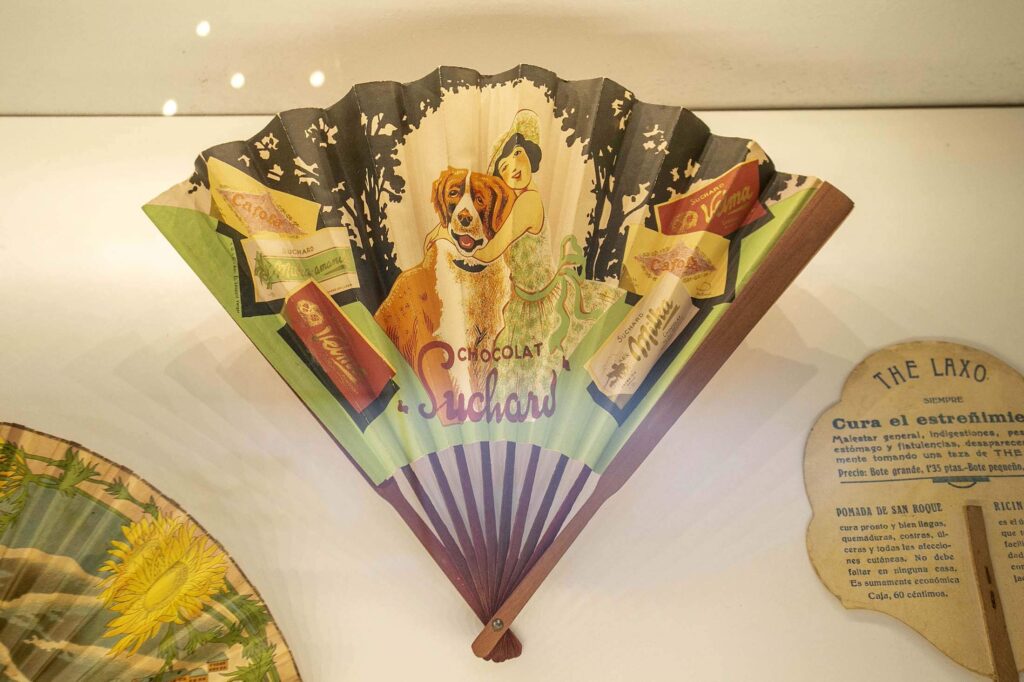 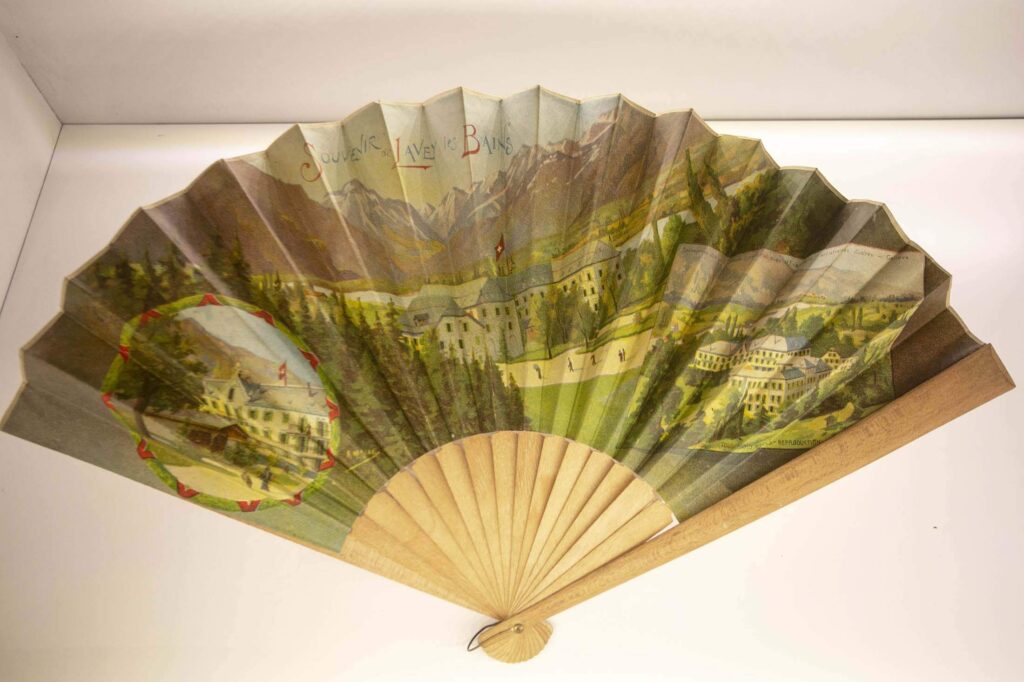 An exhibition of Museomontagna With: Club Alpino Italiano,...