Giorgio Orbi (Rome, 1977) lives and works in Milan, Rome and Marsala.
In his work, in which the use of different media plays a significant role, he focuses on the theme of the transformation of landscapes and the evolution of artistic genres. Writing, sound, moving image, photography, sculpture, installations with organic and non-organic elements, are some of the devices used by the artist to convey his rich imagery.
Mountaineer and mountain lover, in his research Orbi often faces, through the use of different media, the concept of the mountain as a natural and cultural “presence”.
“INTHEMOUNTAINS” is an ongoing project by Orbi, whose artistic and identity research “goes up and down the mountains” since 2008. It is a multi-format work in which a series of installations, a website, a radio program and a film take space. The website (www.inthemountains.org), a long and incessant flow that brings together the artist’s personal photographic archive with some of the works he has developed within this research, is an articulated and layered work that tells Orbi’s research and artistic practice and his questioning about the mountain, its role and that of the artist respect to the contemporary landscapes. 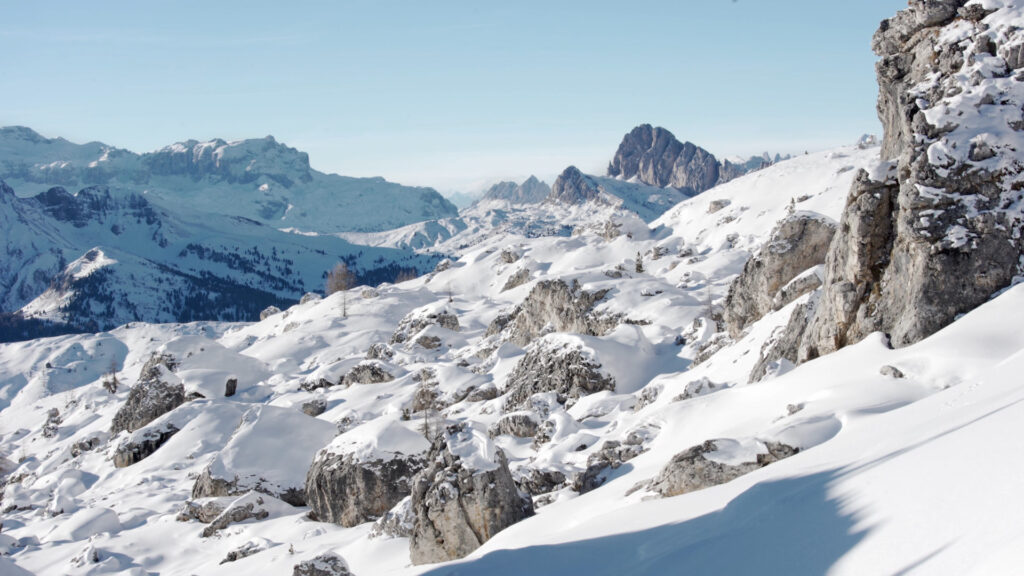 VL
In your work it’s evident that sound is a recurring element of your language. “INTHEMOUNTAINS” starts from the symbolic relationship between the mountain landscape imagery and that of musical subcultures linked to the world of dance music. Can you clarify what in your opinion is the link between the mountain and music?

GO
Sound can amplify the processes of isolation and those of integration in the environment: when we play mountains, I am referring to moving images; to the eye they may appear unrecognizable, especially if reported in a real context.
Mountaineers with their climbs in inaccessible places have built the history of the alpine landscape, the most extreme, inaccessible one. Here an unknown world of rock and ice becomes one of language. At the same time, a little further downstream, their increasingly recurring presence starts the hospitality business in the mountains. Mountaineers were the first tourists.
The Club Culture introduces a concept of expanded space: the physical one becomes infinite thanks to the mental one. The Alps as a natural and cultural landscape are a complex object, the Dance puts in time the ideas of the designers who have designed it.
When you love the mountain and try to tell it with music: blues keeps the spirit trained, techno also the body.

AL
One of the things that struck me most in seeing the film “INTHEMOUNTAINS” is the association – in some ways dystopian – that you make between images, sound and references to other sonorities and apparently independent from the visual narrative.
What emerges is a symphony of stories, places, sensations, images, visions and themes that, in characterizing the work, telling your personal way of living, reading and feeling the mountains. But, if I’m not mistaken, this does not only have to do with a personal conception, rather, with a conceptual and experiential idea of ​​understanding and enjoying the mountain that has radically changed today. What do you think?

GO
Sport climbing has experienced social changes to transform itself from an underground sport to a mainstream movement that includes a globalized lifestyle, oriented towards young people and which today is suitable for all ages. Like Club Culture.
The Mountain is still the mind, mountaineering a primitive psychology where instinct matters more than the intellect; mountaineering can also reach the heart while psychology stops first. The complexity and number of steps in a climbing gym simulate the possibilities offered by artificial intelligence. A new mind.
At the end of the nineteenth century, mountaineering called the Alps the playground of Europe (Leslie Stephen) for the first time, today the artificial walls recall the scenarios of video games. Video games incorporate portions of reality, sports incorporate the scenarios and actions of video games. 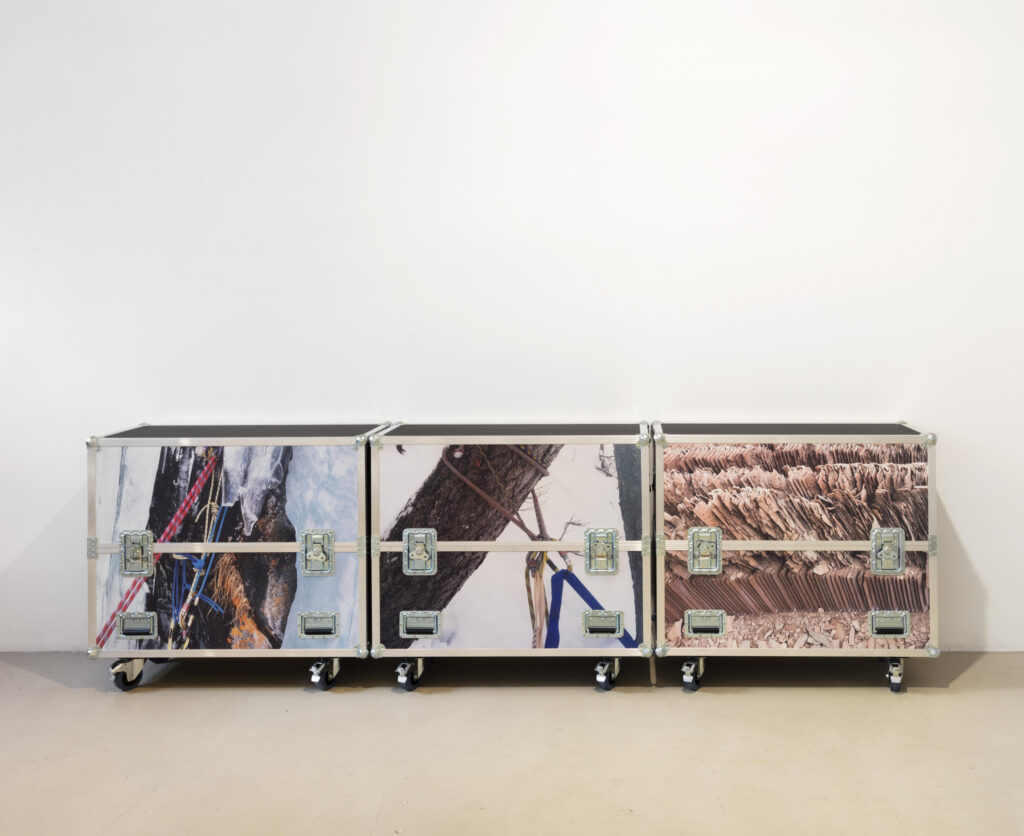 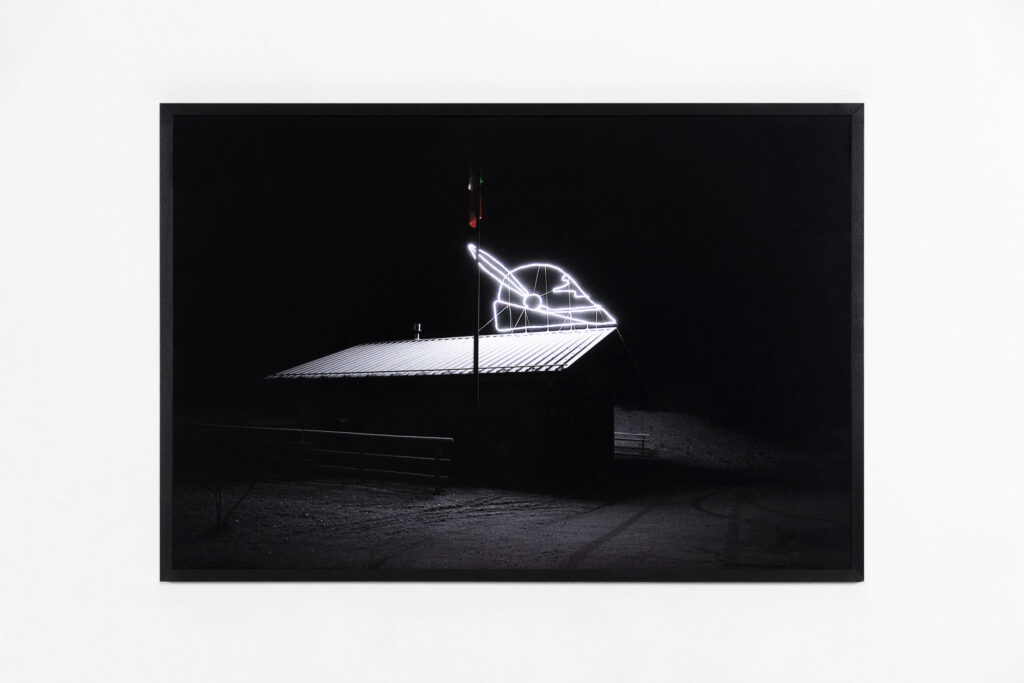 VL
Both the website and the film “INTHEMOUNTAINS” tell of a complex project and research, full of references and multiple gazes (between real and imaginary, inside and outside, past and present, ambient and electronic sounds, etc.) that reveal alpine landscapes in continuous metamorphosis. One of the aspects that struck me most is the concept of repetition (the rhythm of images, the voices you insist that they come back like an echo) that through the image of the parrot also in the definition you give of Technology When you say: “Technology it’s like a well-trained parrot, capable of duplicating and reproducing any code, especially its own image. ” How do these insights dialogue with the mountain?

GO
At one point the parrots went to live in the capitals of Europe, even the coldest ones. It was like when one field of knowledge ends up in another, like when the neorealist experience moves into the comedy of manners. Luciano Emmer, Domenica d’agosto (Sunday in August), 1950.
Between the human and the parrot there can be the same empathy that there is between the human and technology. Uncanny valley, uncanny parrot. Parrots know how to reproduce language and therefore know the time, only apparently they don’t want to share it with us. Parrots repeat our words, our numbers and make fun of us.
Sometimes when technology transforms analog into digital format, or when we talk to a vacuum cleaner, we can have the same feeling. This feeling will disappear, just like glaciers.
The development of a consumerist society cannot fail to take care of nature. In the Mountain, technology must develop progress and the savage together, and equally distribute the profits from the growth of both sectors to humans and nature.

AL
The rhythm of the video seems to invite the observation of the mountain as an open space, a container of experiences, a territory in which and through which to welcome an idea of ​​experimentation. The work was born as part of the Progettoborca ​​at the Dolomiti contemporanee. What role did that place and that experience play in the design of the project?

GO
When I was for the first time at the Eni Village this was in a complete state of abandonment, an uncontaminated urban archeology in a total place, behind the Antelao, in front of Monte Pelmo: two important mountains if you think that mountaineering in the Dolomites was born on the Pelmo and Antelao is the second highest peak after the Marmolada.
The Eni Village is like a party lost in the mountains, it’s not clear when it started, nor when it ended, but we know who the DJs were: oil, politics, religion, economy, family, work, concrete, holidays, architecture, design, the Mountain.
Later, it became one of the construction sites of the Dolomiti contemporanee, model of regeneration of the territory. A forgotten, very complex place that turns into an ambient visual arts laboratory. Here, projects with artists are also developed in the long term. When they invited me to the residence, the broadcast on Radio Cortina and the shooting of the film lasted a year. Progettoborca ​​played a very important role for me because it was all there, we just had to “redo the ropes”. 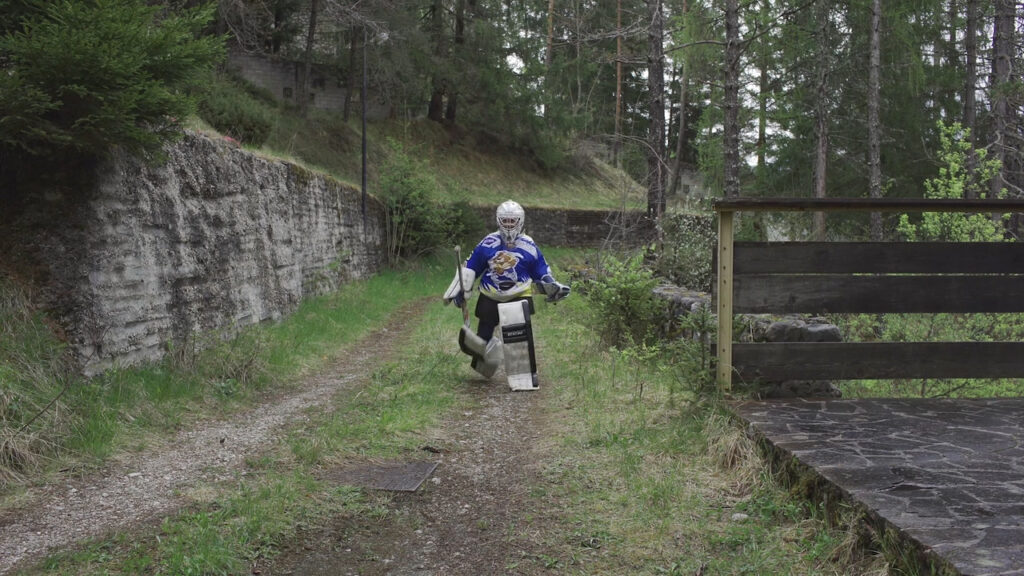 VL
The title of the project derives from “What the Thunder Said”, the fifth section of the poem “The Waste Land” by T.S. Eliot. While in the first section the American poet and playwright praises the mountain as a space of relief from the sense of anxiety and frustration of the city “Wast land” (In the mountains, there you feel free), in the fifth, which you use as a reference and audio track, Eliot seems to leave us hopeless when he says that there is no more peace even in the mountains: There is not even silence in the mountains / But dry sterile thunder without rain / There is not even solitude in the mountains / But red sullen faces snear and snarl.
Through your research have you been able to understand what your vision of the mountain is and what role it can play for the individual today?

GO
I like both visions, the Mountain can overwhelm you with mixed emotions. J. Ball, “Peak, Passes and Glaciers” (1859) recounts the mountain excursions of the first members of the Alpine Club UK. “The Waste Land” (1922) has been compared to a manual for surviving modernity. Many scholars read Eliot’s poem as a symphony, a book that becomes sound.
Eliot proclaims himself a classicist in literature, yet “The Waste Land” celebrates the chaos of modernity, the absence of meaning that no longer admits the coherence of the narrative. Even the use of words in dance music follows the absence of meaning to produce a reaction of new meanings.
In the Mountains we find the space-time coordinates of our human role in nature. If we stop dancing, we stop being in nature, Dance the Mountain.
My vision of the Mountain is what I feel when I am on the Mountain; go and listen to Nature live. It’s a Club open 24 hours a day.