Combining sculpture, action and film “A walk in the Alps (Axis Mundi)” was developed at Kunstdepot Göschenen in the Swiss Alps. Protagonist of the work is a geodesic sculpture as it is carried up an avalanche route and the internal perspective as gravity returns it to the valley floor. 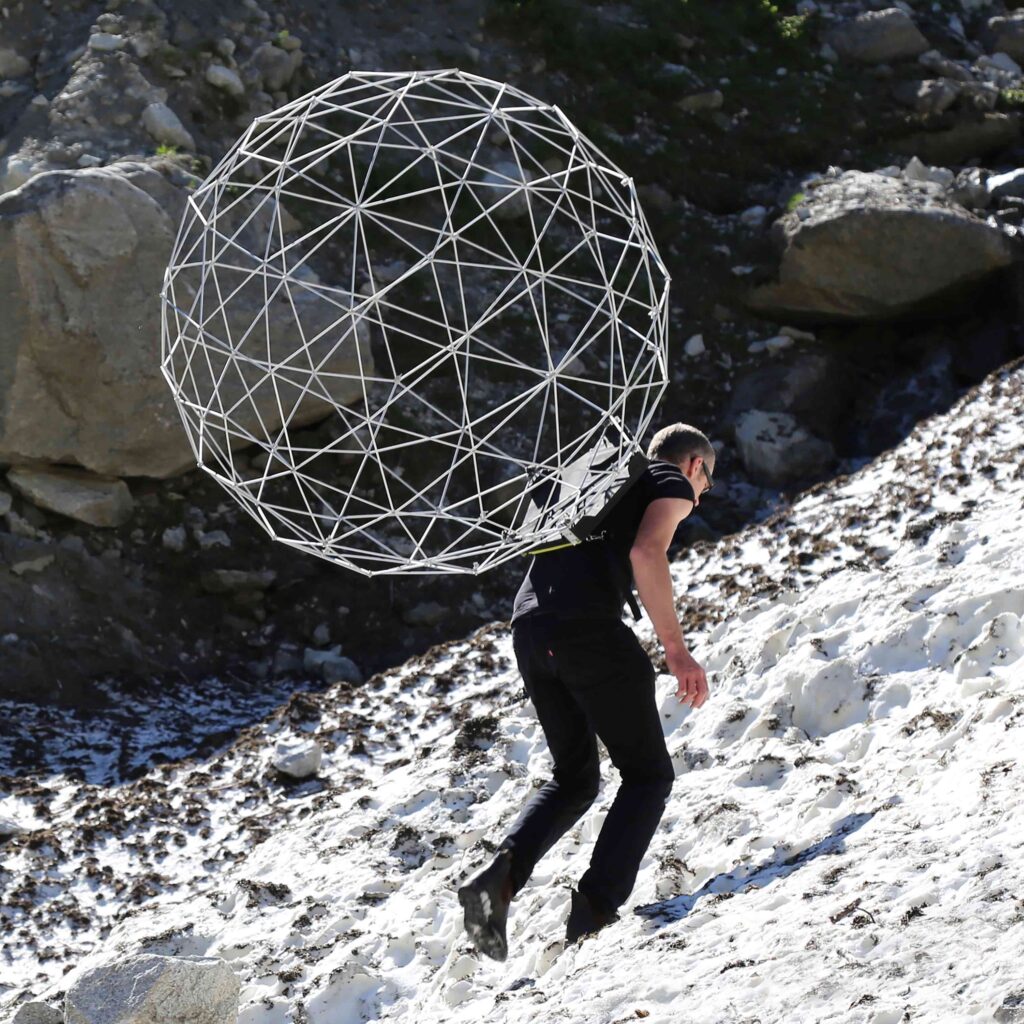 A CONVERSATION BETWEEN THE CURATORS AND THE ARTIST

AL
Dear David, contextualised in Mountain Scenarios’ project, “A walk in the Alps” seems to me absolutely evocative. In your work you take on the role of a modern Sisyphus, carrying on your back the skeleton of an empty body, you represent the effort of the climb to the top of the mountain. The fall of the sphere, which all of us can witness – with the point of view seen from its centre – producing a series of physical consequences that damage the structure and its shape. In wider parallels, the sphere could represent the world, while you interpret humanity. “A walk in the Alps” tells of an era of Neo Decadentism – an era in which global warming alters the morphological, economic and social structure of mountain territories – stimulating our imagination and the search for a new Axis Mundi.

DR
Hi Andrea, thanks for the invitation to contribute to the Mountain Scenarios’ project. During the first couple of months of my residency at Kunstdepot Göschenen many of the surrounding valleys were closed due to avalanche threat, so the entropy of the alps felt like a very real force surrounding the studios. The work is formed of three parts; the ascent, carrying the sculpture into the mountains like Sisyphus, the descent seen from inside the geodesic sphere and lastly the resulting sculpture. In terms of the relationship between humanity and the world, I’d say that it shifts during the different parts of the work, as echoed though the changes of viewpoint from external spectator to internal participant within the film. As we progress deeper into the era of the Anthropocene, our relationship with the natural environment is changing, and I think that any search for a new Axis Mundi is really about changes in our perspective on how we treat this planet we call home. 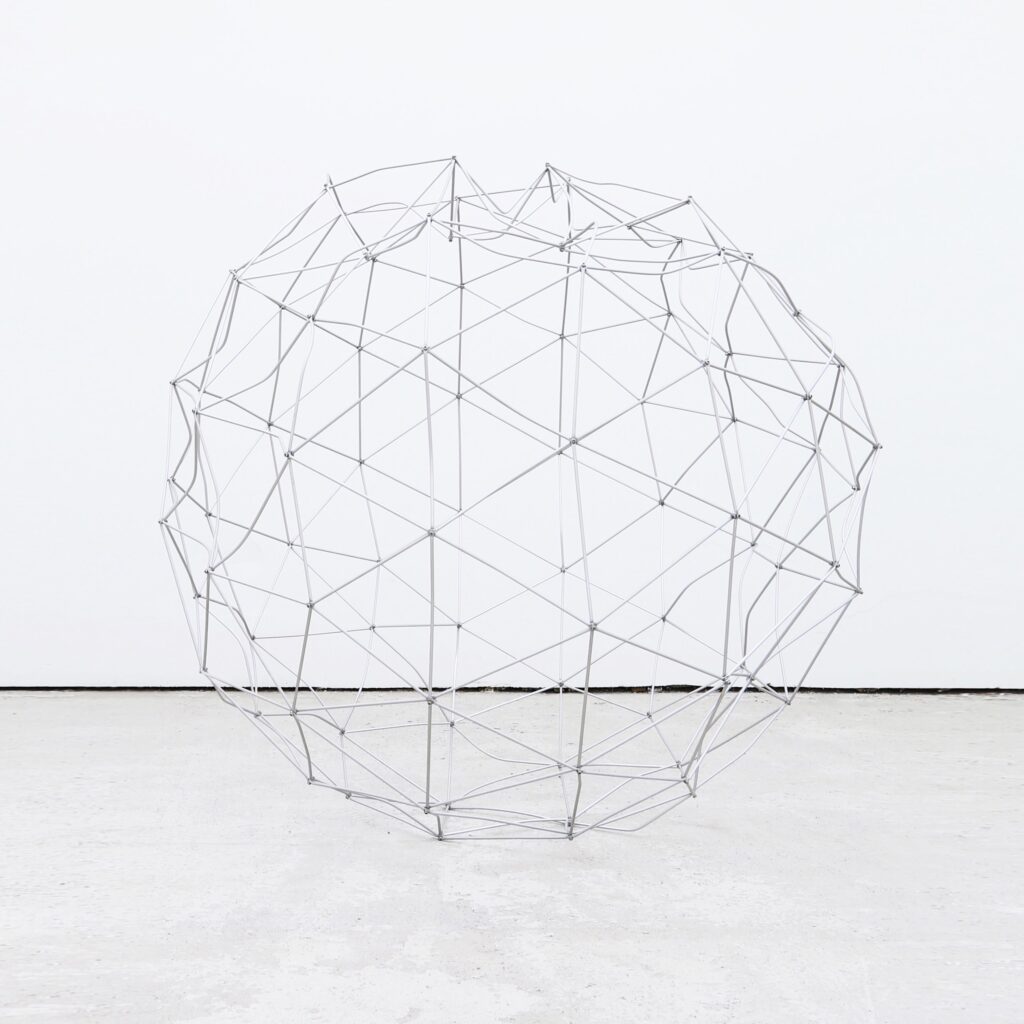 VL
In your video you carry on your shoulders a geodesic sphere, designed by the architect Richard Buckminster Fuller, who was also interested in sustainability and the survival of the human species. In 1963 Fuller introduced the term “Design Science” as a reference to the conception of Art in Science and Science in Art. Your original studies in architecture have had a great impact on your work and your artistic practice which includes investigations into material and spatial perception.
For the ‘sacred geometry’ the geodesic sphere is the three-dimensional evidence of the natural balance, of the laws and patterns behind everyday actions. Yet the movement of the sphere that in the video rolls like an avalanche with a perpetual movement and seems to speak of instability rather than an order behind the apparent chaos of life. What vision do you want to represent? Do you imagine that one of the two conditions (balance / instability) prevails over the other?

DR
When making the work I was researching the structures of Buckminster Fuller and his ideas on global sustainability, alongside the role mountains play within our imagination, their symbolism as an ‘Axis Mundi’ between the earth and sky and the myth of Sisyphus who never manages to reach the summit. Making the work ‘A walk in the Alps’ was in many ways an experiment, which involved a lot of planning but also complete uncertainty in the outcome as the sculpture was released into the landscape to fall down the mountain. The resulting film was then edited into a perpetual loop, which means the viewer never reaches the valley floor, but remains in a constant revolution. Also, the final sculpture retains a clear memory of its precise fabrication within the twisted form generated from its descent. So, in my mind neither balance nor instability prevails within the work, but it’s an ongoing dialogue without a conclusion.

BIO
David Rickard, (1975) is a New Zealand artist based in London, UK. His original studies in architecture have had a lasting impact on his art practice, embedding queries of material and spatial perception deep into his work. Through research and experimentation his works attempt to understand how we arrived at our current perception of the physical world and how far our perception is from what we call reality.