Margherita Morgantin graduated at the I.U.A.V. of Venice with a thesis in technical physics, studying methods of natural light prediction. From her academic profile it is possible to understand how the nature of her research, strongly characterized by the use of science and scientific language, develops in the direction of a transdisciplinary imaginative reflection.
At the base of his thought there is the need to investigate critically conventional visions and paradigms. Her work touches various fields, from language to philosophy, from mathematics to visual culture, ranging from the investigation of environmental issues to the critique of patriarchal culture and through a frequent confrontation with feminist criticism.
Her latest work VIP = Violation of Pauli exclusion principle was born in relation to a series of scientific studies conducted by the researchers of the LNFN nuclear physics laboratories located under the Gran Sasso. The project develops in different moments: the research, Above the mountain and Below the mountain and the restitution and divulgation. 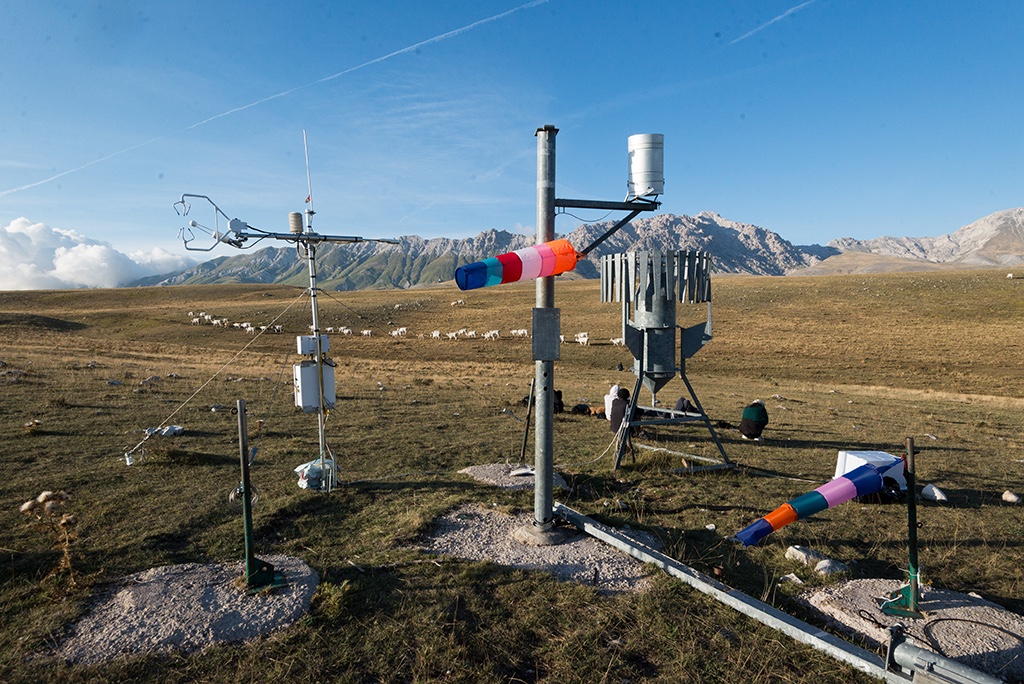 MARGHERITA MORGANTIN IN DIALOGUE WITH THE CURATORS:

AL
Margherita, tell us about your relationship with the mountains, how did this project come about and what kind of dialogue have you activated with the researchers within the VIP project?

MM
The mountain is what I saw on the horizon every day since I’ve been teaching at the Academy of Fine Arts in L’Aquila, it’s a distant and discreet presence on the urban scenario that makes you feel a strong energy, and my eyes have become accustomed to looking for it as a reference and an opening for my gaze, before and after my work days.
When I first climbed up to Campo Imperatore I was incredulous at the beauty and infinity of the landscape. Brullo open and marked by the trajectories of animals. Fosco Maraini called it Little Tibet.
Under the mountain are the Laboratori di Fisica Nucleare del Gran Sasso, the VIP project, with the help of producers Silvia Fanti and Daniele Gasparinetti of Xing, was born from the desire to go down and visit the underground tunnels of the laboratories and climb the mountain. I initially contacted Catalina Curceanu, responsible for the experiment that gives the project its title VIP= Violation of the Pauli exclusion principle because I was interested in talking to a woman scientist; then I also talked to other researchers and physicists working under the mountain. We met for the first time at the Institute of Nuclear Physics in Frascati, next to the particle accelerator, then she came to visit us at Camp 1 ABOVE THE MOUNTAIN together with the researcher Kristian Piscicchia who works on the experiment. Finally, she guided me on an initial underground visit in online mode to the ‘shack’ where VIP is located.
The dialogue naturally begins with questions about the research they are conducting, and the first part of the answers sometimes sound like a ready-made popularized version, then within each relationship I tried to establish a boundary of trust so that I could say something of what I am looking for and thus have the opportunity to broaden the field in search of common ground. This is not always possible and does not always make sense.
Catalina does not emphasize the gender difference, I am the one who brings her the question, walking together on the mountain, while a storm is coming from behind the Corno Grande, I talk to her about Evelyn Fox Keller while she invites us not to run in presence of lightning (we would attract it to us because of the difference in charge of the electromagnetic wake).
The dialogues that took place over the mountain were generally more intimate and more open than those in telematic mode. One LNGS astrophysicist told me that he had worked only once in 30 years in a lab that had a window. I read them a few sentences from Simone Weil’s text Science and Us.
How does that knowledge about the Universe and elementary particles affect us individually? 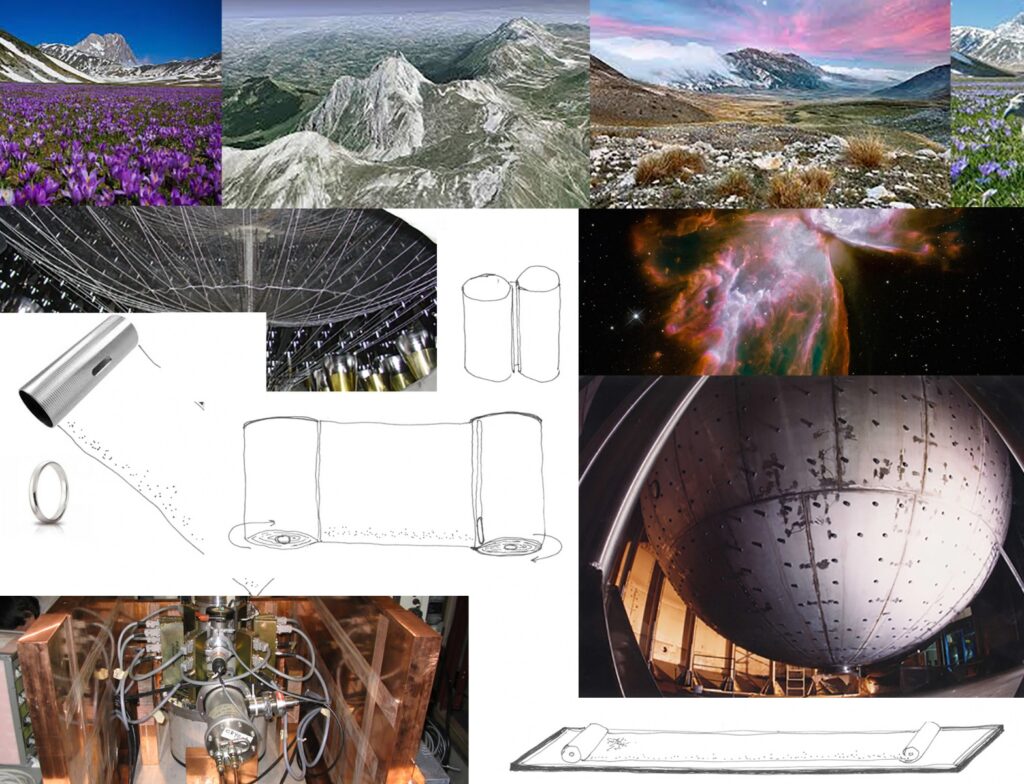 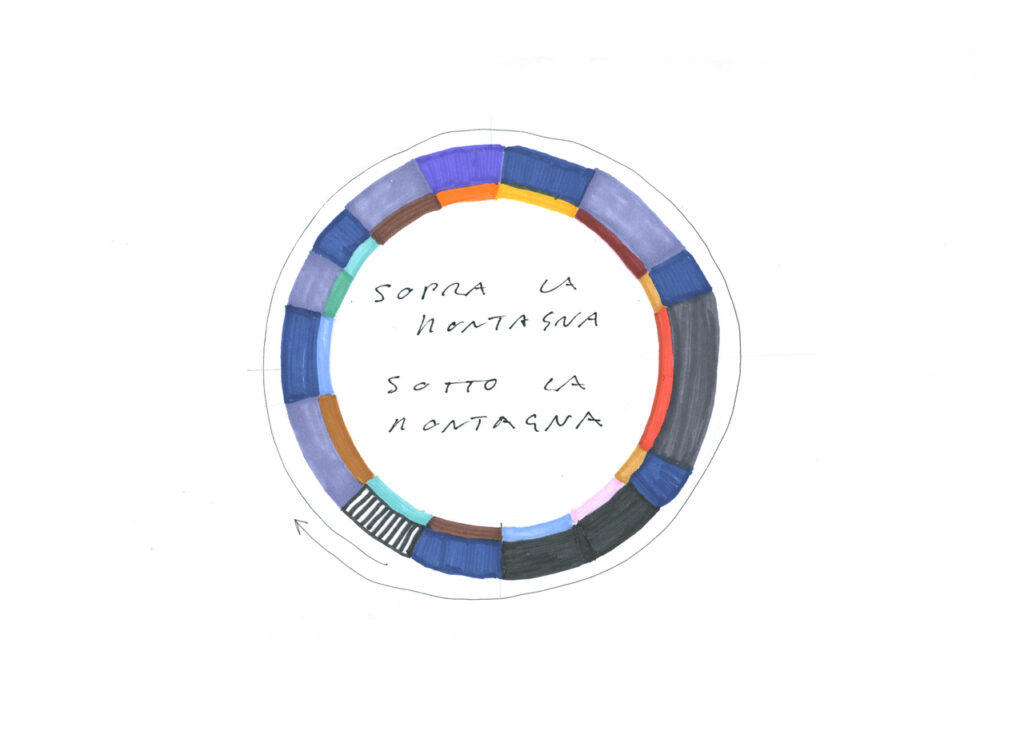 VL
One of the theoretical references of your research is Simone Weil. Searching for truth, for the French philosopher and mystic, was above all a commitment to attention, understood as care and listening.
In the base camps above and below the mountain, you put yourself in listening and in relationship with the surrounding environment, whether natural or artificial, using “personal sensitivity as a form of scientific data.” What did it mean to you?

MM
What I meant by that expression is the integration of the feeling (and therefore of the emotionality) of the body in research, given back in visual, sound, and tactile form in artistic work and in the comparison with the images and places of scientific research. Special senses that develop from the body placed in relation, placed next to the extreme technologies of science.  The work is about the relationship with and not about the speculative knowledge of physics.
Camp 2, UNDER THE MOUNTAIN, will be in the next few weeks, visits have been suspended for almost a year, this has given me time to study more and prepare for the experience.  I am in the middle of the project and can’t tell if/what the conclusions will be. I won’t be able to stay in the galleries for long so I’m preparing questions for myself and for those who will come with me. I think back to when I went down to visit the iron mines of Kiruna, dug into the earth up to a depth of 1045 mt, and I remember having walked underground in the Abisko caves, completely dark tunnels where water flows and it is not possible to stand. I think back to the enormous dome of the cave of Su Marmuri in Ulassai, to the caves of Postumia. I wonder how the cosmic silence under the mountain can be perceived, what effect it has on the bodies of the researchers, on their breath, and on their thoughts. I am curious to see the bodies of the experiments, it is said that the ‘machines’ of physics are barely uglier than a washing machine (because at least for the latter there has been a thought about its form, a design), I am intrigued by this form conceived solely for the function it has. One of the experiments I am studying is called C.U.O.R.E. (Cryogenic Underground Observatory for rare events) they also call it the coldest cubic meter in the universe, and it is contained/protected in an ancient lead coat recovered from a submerged Roman vessel off the coast of Sardinia. Even VIP from the outside is a cube of lead.

VL
In your speech at the Great Diotima Seminar 2020 you talked about the violation of the Pauli Principle, reflecting on the fact that the attitude of science is to think that it is the principle that is violated by matter and not matter that violates the principle, thus denouncing the absolute confidence in its inexhaustible progress, without reckoning with its impossibility to grasp the infinite causal interconnections. Simone Weil in her critique of modern science stated that “The time has come to try not to enlarge it, but to think about it”. What is your relationship with science and what do you think its role is today?

MM
Simone Weil said that at the long look, scientific research and artistic creation are similar. My relationship with science starts from there and it’s a form of curiosity that feels its attraction on one side and its excessive power on the other. An ambivalence of admiration and doubt. I agree that it has to be thought about, I don’t believe in progress in this sense. Reading the correspondence between some physicists between the 30’s and 50’s (Pauli, Heisenberg, Dirac, Einstein, Born) it is evident in some the underlying tension of a symbolic and theological plane beyond the structures of physics and mathematics, and this debate together with the development of quantum mechanics happens while the second world war is in progress and while the progress of nuclear physics have already led to the development of weapons of mass destruction. Progress in this sense is complete nonsense. There is plenty to work with between the information we already have and a time for humanity to discuss this information and views between different, more open subjectivities and collectivities. The specialized knowledge of physics is huge and complex and needs a lot of math to sustain itself. I ask how do they see, how do they see the results of experiments? They are probability tables. I wish to observe those as well. 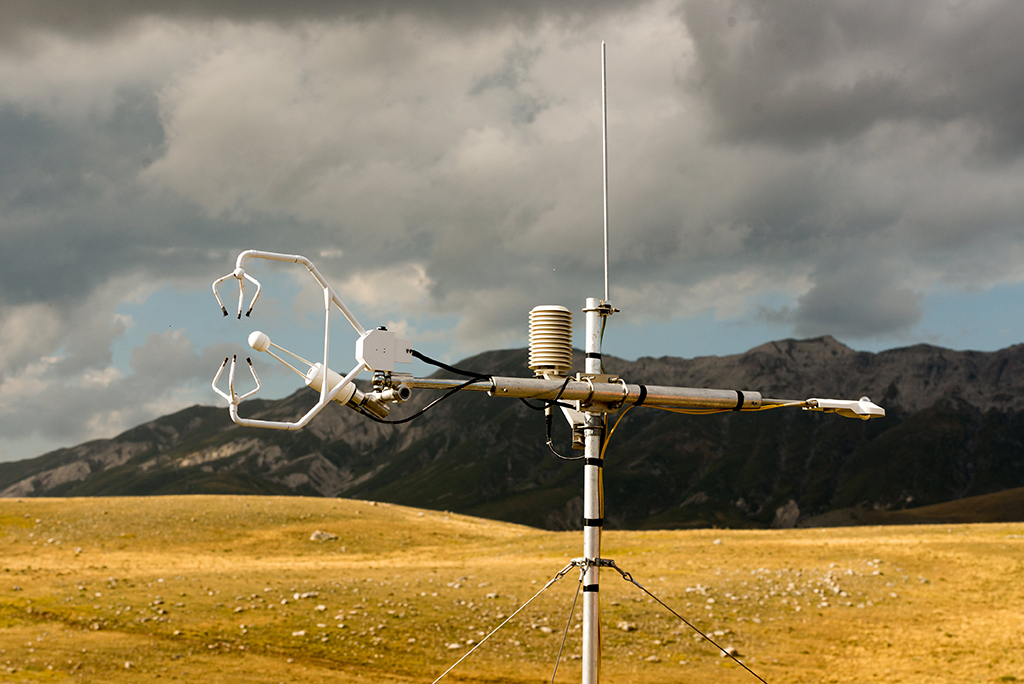 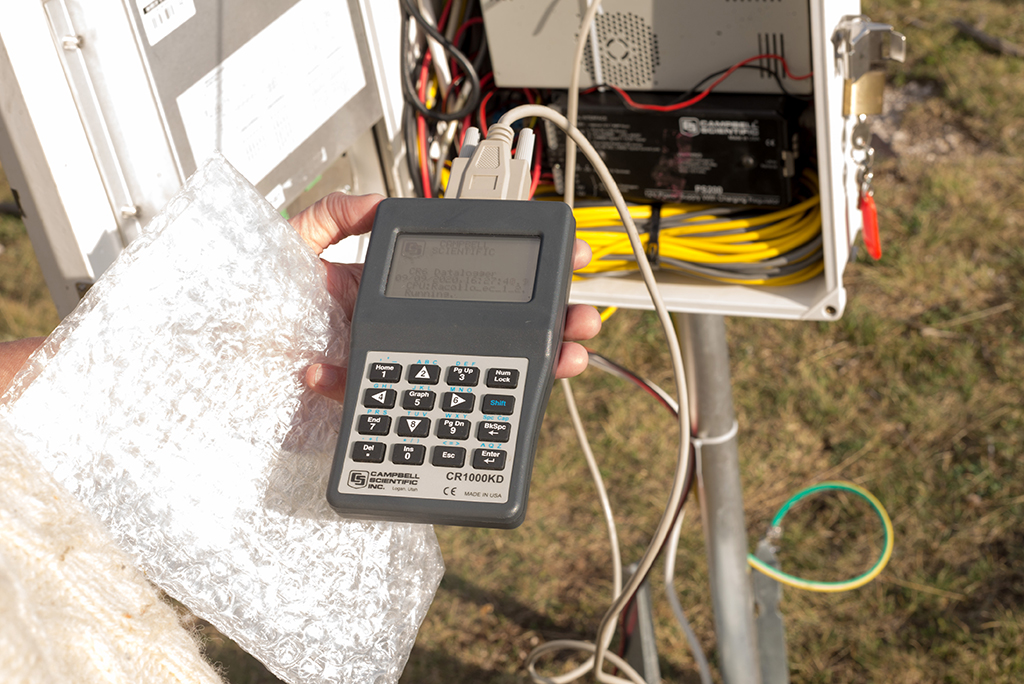 AL
In relating artistic and scientific thought you somehow question – quoting Evelyn Fox Keller – whether it is possible to liberate science from the male-female dilemma. In relation to this issue Helen Hester adopts the word “Xenopheminism” to describe “a techno-materialist, anti-naturalist, and gender abolitionist form of feminism,”[1] whose attempt is to “formulate a gender politics appropriate to an age of globality, complexity, and technology.”[2] This is a form of feminism that is more than just a form of feminism. Do you think yours is a xenophilic view?

MM
The “globality complexity and technology” I think is showing in this time the measure of its fragility and failure in planetary terms. In a drift that goes in the direction of the disappearance of bodies, I find myself more in agreement with the positions of an eco-feminism in the search for new and deep relationships with the planet, with animals and plants, but also with the mountain the winds and particles. For this we need languages and sensibilities more complex than algorithms, and less destructive technologies. VIP is a question in this direction and it is a consequence of a feeling grown in my feminine difference. 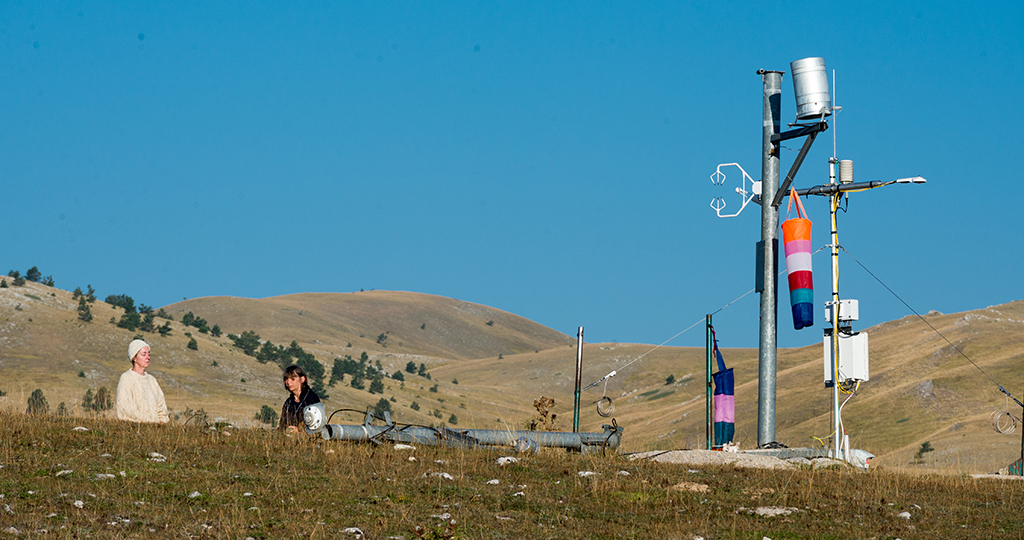 Margherita Morgantin was born in Venice, she graduated in Architecture at I.U.A.V., in Technical Physics, studying methods of forecasting natural light.
She is a visual artist. Her work is articulated in different languages ranging from drawing to text to performance. She has participated in contemporary art exhibitions in Italy and abroad, at museums, public and private institutions. During her practice she has collaborated with many artists and choreographers. She is part of the female philosophical collective Diotima.
She teaches Artistic Anatomy, Scientific Illustration, and Performance Techniques at the Academy of Fine Arts in L’Aquila.
She has published a book of short texts and drawings: Titolo variabile, Quodlibet, 2009; Agenti autonomi e sistemi multiagente, (with Michele Di Stefano), Quodlibet, 2012; Wittgenstein, disegni sulla certezza, Nottetempo 2016; and Lo spazio dentro (with Maddalena Buri), Nottetempo e-pub, 2020.
He also works as Pawel und Pavel, a collaborative writing and performance project, started in 2013 with Italo Zuffi.