Cortina 2021 Observatory. The valley between the peaks and the stars.

For the last three years Gianpaolo Arena and Marina Caneve have been working on Cortina and its territory, intended as a geographical and social space, in view of the World Alpine Ski Championships Cortina 2021, which took place from February 8th to 21st. Through the project “Cortina Observatory”, Arena and Caneve have created a photographic survey that documents the key moments in the construction of the sporting event, looks at the history of the place and explores its identity, and investigates the link between sport and territory. The result of the work, La valle tra le cime e le stelle (The valley between the peaks and the stars), is a story told through images and texts that gives an account of the complexity of the mountain territory through an in-depth examination of some crucial themes, such as the infrastructures, the facilities, the summer and winter use of the mountain, the culture of sport and its protagonists, the representations of Cortina and its valley, also through the use of archival images.
Arena and Caneve’s artistic research, both individually and together as the CALAMITA/À project, of which they are also curators, focuses on themes such as the representation of the landscape, complexity and vulnerability, both social and environmental, developing a multi and interdisciplinary approach. 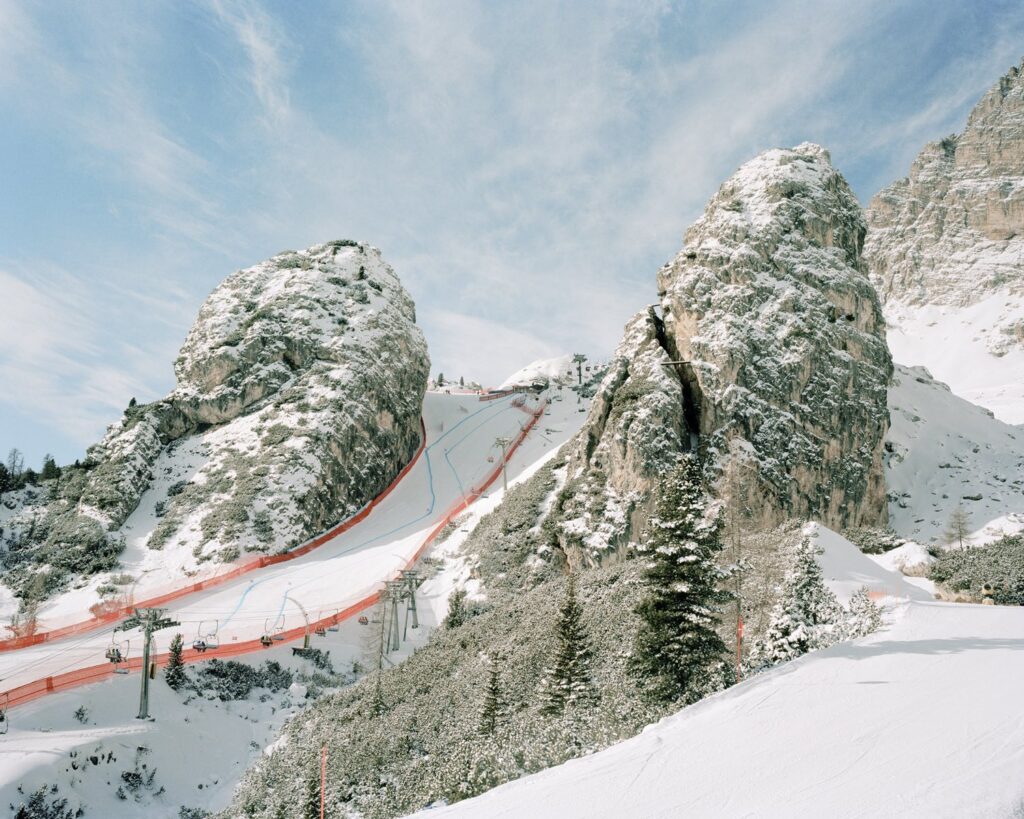 A CONVERSATION BETWEEN GIANPAOLO ARENA, MARINA CANEVE AND THE CURATORS:

AT
As stated in the introductory text to the catalog, Osservatorio Cortina 2021 “is an artistic research project in which, through the use of photography, the territory and the time span in which the World Alpine Ski Championships of Cortina 2021 have been investigated. Over the course of three years you have been engaged in documenting the key moments in the construction of the sports event, observing the places and their history with an open, curious and explorative attitude, searching for traces of the link between sport and territory. It is clear that this trip also put you in contact with the cultural, social and environmental dimension of the place. If you had to return this experience with a word or a concept, which one would you use?

GA
TIME, in its cyclic and merciless mechanics, is a dimension that holds together many aspects of our research. On one hand, the geological one of the mountains, stratified in millions of years with inexorable slowness, and the historical one of human civilization in its past, present and future relations. On the other, the changes of the last century due to human transformations and to the redefinition of an unprecedented anthropized landscape. Still the cyclical time of the different seasons, that of tourist flows in the holidays and in the progressive settlement of second homes in the summer months. Also that of media overexposure and hyper-connected digital information or the time of hundredths of a second in ski races. Shaky counter-fields where we can represent the dimension of time and everything that moves in this space.

MC
The INSISTENCE of the LOOK seems to me to be a precise term because it represents the act of looking and that of staying. Exploring the same places almost to the point of boredom, experiencing as authors a feeling of frustration that has to do with the continual review of the same things until we no longer see anything new, only to stumble upon small details that surprise us and make us start seeing again. In other words, it is an obsessive gaze that has to do with the discovery of a place that slowly becomes familiar, only to encounter elements that disrupt the order to which we had become accustomed in the meantime. The obsessive gaze becomes precise and then reopens in a continuous distancing and approaching to the subject of the research itself.

VL
In your research there is frequent recurring use of “images of images”, what William J. Thomas Mitchell calls “metapictures”. The result is a journey of knowledge of the territory through the iconography of Cortina: from the Five Towers to the Schuss of the Tofane. In this investigation of yours, what were your references: the personal iconography with which you approached the territory to be investigated and the personal stereotypes that you had to fight?

GA
Through a gradual process of stratification, the knowledge of the vernacular culture of the places was added to already existing references. New images, ubiquitous and recurring, gradually took the place of previous images. We desired and subsequently sought out photographs that we were unable to return. Similarly, in light of this frustration, we were unexpectedly surprised by other images, between tension and distraction, between irony and amusement. The most “insidious” stereotypes were those tied in two ways to the aesthetic fascination of places so celebrated, so well known as to be recognizable icons, so praised as to be sacred monuments of the Dolomite landscape.

MC
On the one hand, I like to think of embracing the stereotypical image to generate short circuits of meaning that allow us to question our beliefs about the physical and cultural landscape.
I realize that the images with which I approached the territory of Cortina at the beginning of this project were above all images of memory that derived on the one hand from direct experience and on the other from an accumulation of information. Some stereotypes belong to the imaginary of Cortina, others to the mountains in a broader sense and in this way they become universal. In the book, not by chance, in the section of the archive entitled “infinite representations”, the iconography we have constructed dialogues with a series of mini-guides to literature, non-fiction, video and sound; references for us to confront our stereotypes and, at the same time, “windows on the world”. 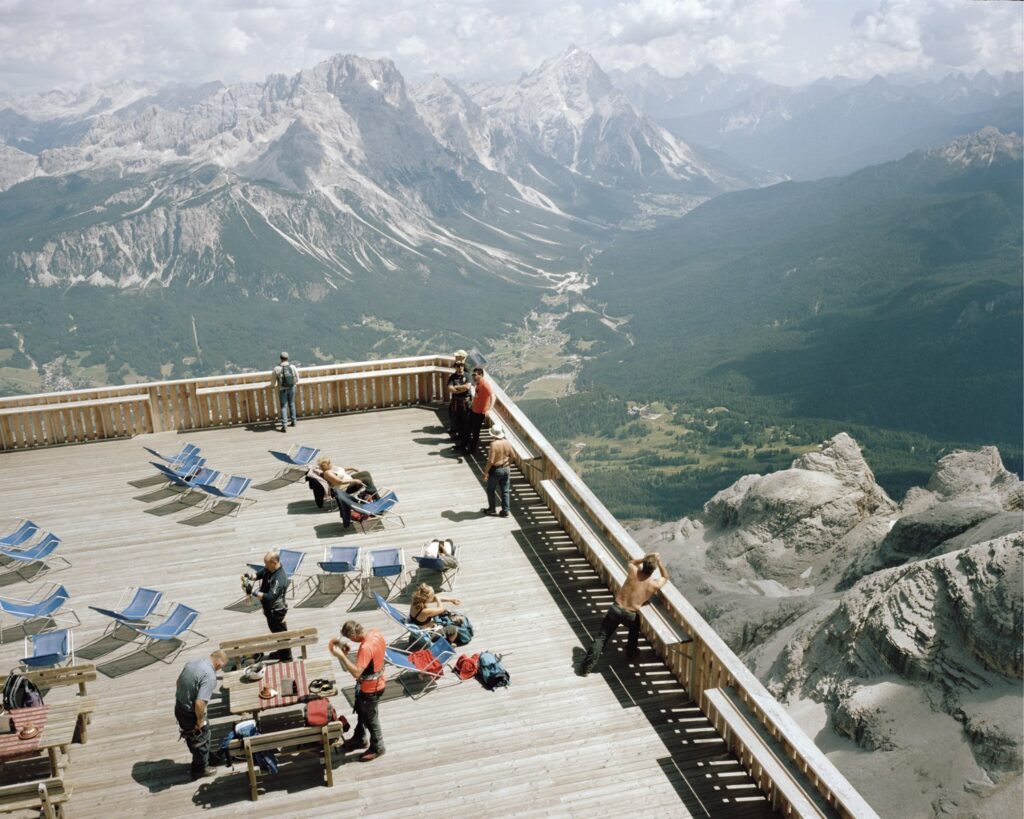 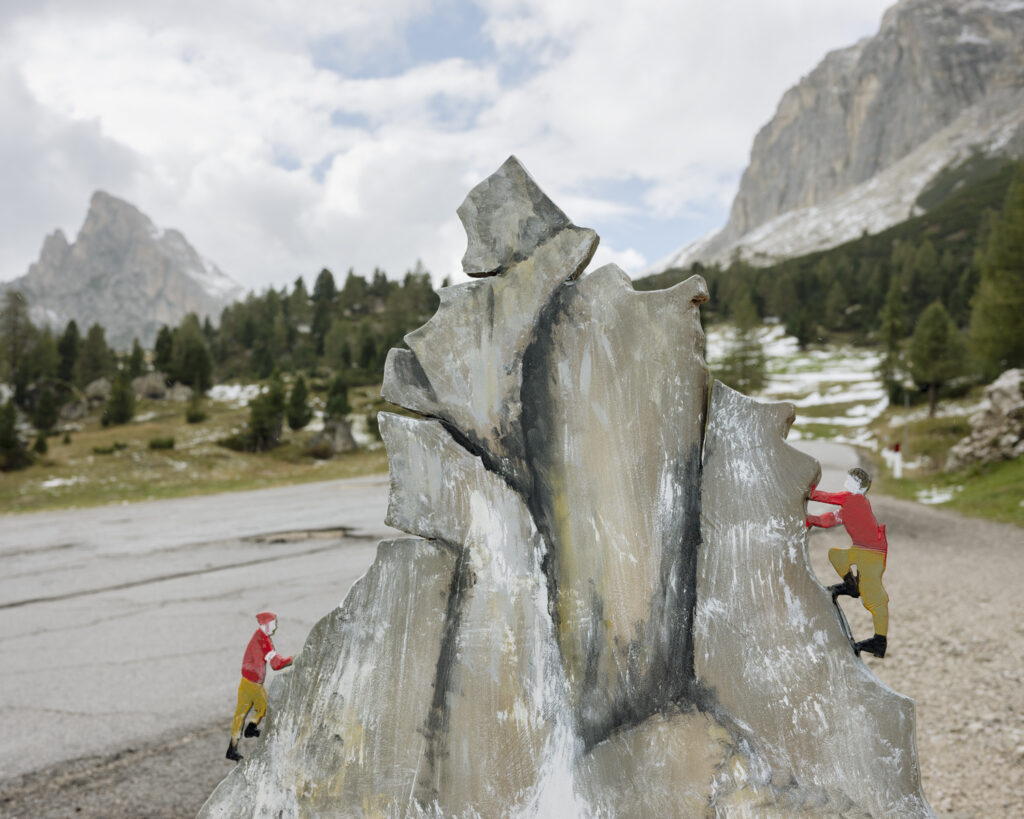 AT
Cortina 2021 was in some ways a dress rehearsal for the upcoming 2026 Winter Olympics. The mountains remain the scene of historic international events but, in the wake of the recent pandemic, are being rapidly transformed in many ways.
In light of the path taken with your photographic project, if and how do you think Covid-19 is changing the mountain landscape, understood as a space of life in the meaning of Annibale Salsa (I paesaggi delle Alpi, 2019)?

GA
Nature and culture constantly interact and are an integral part of our local ecosystem with its economic implications and sociopolitical contradictions. Man himself is the one who is called to “make the landscape” and to search for his living space in the mountains. Through his actions and behavior he is the main architect of this process of rewriting the landscape itself. If Covid-19, as well as other viruses, arises because of the reckless behaviors of humans, it is humans themselves who later pay the bill. The recent pandemic has encouraged a discontinuous exodus to places considered safer. The flight from over-urbanized settlements to green and pure areas is just one effect. The desire to “be on earth,” to forge a strong relationship with one’s origins, brings us back to a new relationship with nature that culture produces especially when we miss it, when we move away from it. In relation to globalized sporting events, the immateriality of mass communication and the increasingly ramified extensions of technology make it possible to experience a surrogate of this widespread spectacle.

MC
In fact, taking the case of “Cortina 2021” as a concrete example, we were confronted for the first time with a major sporting event on a global scale that, contrary to our initial expectations, could only be enjoyed remotely. Naturally, however, the World Cup, just as it will be for the Olympics, was a punctual event, even though it was built through years of work on the territory.
On the other hand, the time that most interests the space of life that Professor Salsa speaks about is that space in which the (mountain) landscape passes from being seen to being lived, in other words from being a place of spectacle to a place of life; becoming a place of life puts us increasingly in front of the criticality of living in the mountains. Considering the contemporary a liquid space and except for a development of broadband networks, I wonder if living in the mountains will undergo radical changes related to the detachment from metropolitan areas, if the mountain model will be able to adapt to the idea of the city of 15 minutes or if simply, once the emergency is over, the dream of the mountain will be pursued as a space of life, where living is equivalent to protect, but also and above all to satisfy needs and necessities. 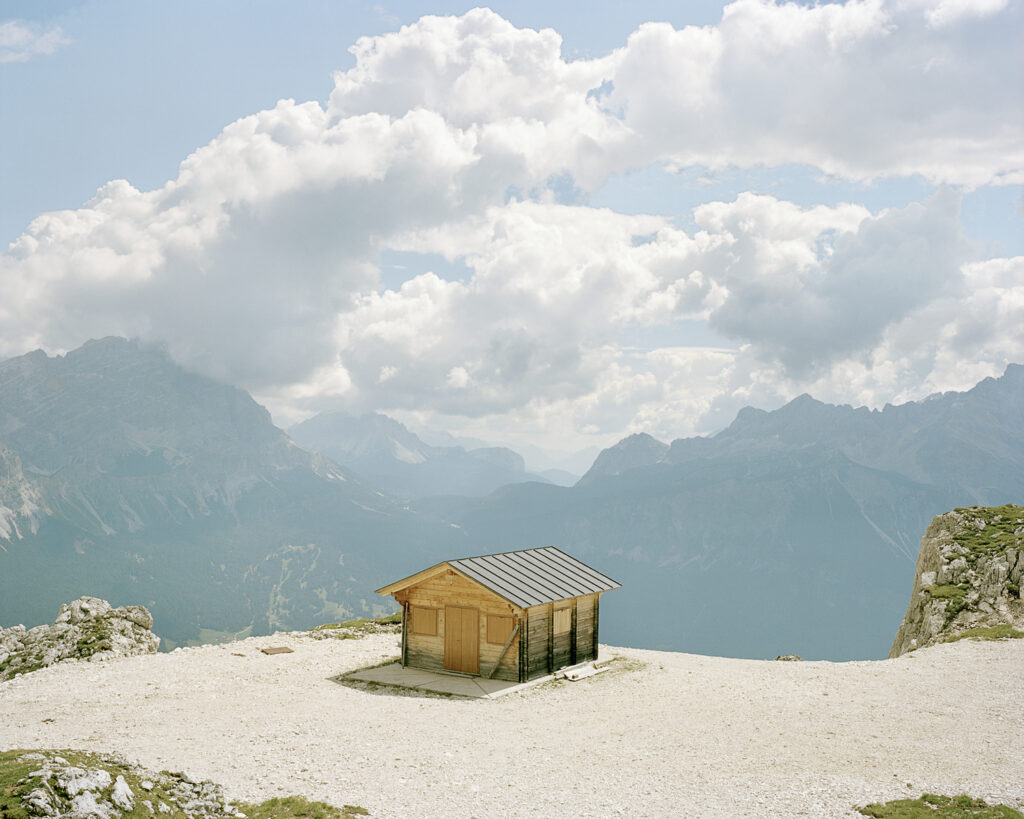 VL
Luigi Ghirri argued that disaffection towards environmental issues could result from man’s inability to relate to the environment through representation. Therefore, photographing the landscape could have a great cultural weight and a great effectiveness (Lezioni di fotografia, 2009). In your opinion, can the representation of the landscape (in photography, in cinema and in other art forms) play the role that Ghirri maintained, or can only direct contact with nature and the place create the empathy necessary to take care of it? And isn’t there the risk of creating “other” narratives of the landscape that are “wrong”, that rather create disaffection and alienation?

GA
“As I began to understand the world through the image, I understood the image, its strength, its mystery.” These words of Michelangelo Antonioni, as well as those of Luigi Ghirri that you quoted, take us back to an idea of awareness, of education in the act of looking that I consider essential. Essential also to establish the relationships between the visible and the invisible, to reflect on the relationships between the real and the possible. Of course, recounting reality means recounting a series of possibilities, hypotheses and paths. The “mystery of images” dear to Antonioni and that we often find in many cinematographic visions and in the contamination between hybrid languages typical of contemporary art are part of this process. Photography can “work” as a media device, as an effective instrument of social communication. Making explicit a thought, an idea or a concept can help to open eyes, heart and mind and contribute to a renewed form of civism, more attentive and aware.

MC
Robert Adams talks about the three truths of landscape photography as a container of autobiographical, geographical and metaphorical truth. Looking at the landscape from this perspective I think it is up to us to convey our thoughts about the environment through our work as artists. Starting from this premise, I also think that the fact that the landscape is not only the (photographic) image of a place, frontal and wide-angle, but it can be manifested through multiple forms of representation – and therefore comparison – with the environment itself, has been cleared. Personally, I love contamination and I am very interested in the gap generated by the encounter between direct experience and scientific research; in general, it seems to me that the point is to consider the environment in itself as a place of study where to manifest the need to make a reflection in the world, with the other, and with everything that inhabits the world, in which experience and research contribute to the construction of a broad debate on the environment, understood not only as a geographical place but also as a social and cultural one.